Reading and Writing Berber in Morocco 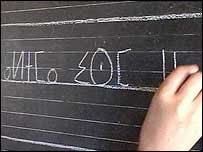 Here is an article from the BBC about the Berber language in higher education in Morocco. I have a few problems with the premise of the article(as usual). I am not so quick to draw a line between Berbers and Arabs when so much of Moroccan history has been about the mixture of these two " identities," and also because i feel as if secular and Christian missionary motives (which both tend to be Islamophobic) like sticking their finger in this cultural and religious "rift."

Aischa Bardoun sees herself as a trail-blazer. She is one of the first Moroccans to get a masters degree in the Amazigh language, spoken by the country's Berber majority.

"We are very excited," she says.

"We studied the older texts that were passed down orally, but we are also writing new literature to reflect the current situation for Berbers in Morocco. It's really ground-breaking."

Although Berbers were Morocco's first inhabitants and account for some 60% of Morocco's population, they faced widespread discrimination and it is only now that the language is required to be taught in public school.


Some students feel having a degree in the language will help get a job. Unfortunately that is not necessarily the case
Ahmed Sabir
University of Ibn Zohr

Their academic qualifications may not help them much on the jobs market, but the availability of a further degree in a subject that was once virtually outlawed in their North African country underscores Berber success in gaining official acceptance of the language.

As well as the University of Ibn Zohr offering degrees in Amazigh, an umbrella term for the three dialects of Berber that are spoken in Morocco, the previously oral-only language has moved further into the mainstream with the creation of a Royal Institute of Amazigh language and culture.

Ms Bardoun and her classmates are all big fans of the doyenne of Moroccan Amazigh singers Raissa Talbensirt.


In her late 50s, Ms Talbensirt speaks only Tashelheit, the local dialect, but was a huge hit at the annual Berber festival, Timitar, attended by tens of thousands of young people.

She can neither read nor write but composes traditional music with local musicians.

"I am glad that the music is being carried forward by the new generation," she says.

"They listen on iPods and watch video clips on their computers, but it all helps our cause."

Although many Amazigh are illiterate, the government has put in place measures to assist schools to teach the written form of the language.

The Royal Institute of Amazigh has overseen the creation of an alphabet based partly on the mystical signs and symbols of the Tuareg found inscribed on tombs and monuments.


This written form is expected to have a unifying effect.

It is essentially a new form of the language which, it is hoped, all Moroccan Berbers will speak and understand.

It has also raised unrealistic hopes according to Ahmed Sabir, Dean of the Faculty of Arts at the University of Ibn Zohr.

"We were very oversubscribed when we started accepting applications for our Amazigh courses," he explains.

"Some students feel having a degree in the language will help get a job. Unfortunately that is not necessarily the case."

But while many Berbers, until recently excluded from jobs in education and government, make up Morocco's underclass, there are also the super-rich who have made fortunes in business.

Many live in the commercial capital, Casablanca, and in the past funded Berber activist groups.

According to Gerd Becker, a German cultural consultant living just outside Agadir, the main reason for the recent change of heart over Berber status stems from the government's desire to provide an alternative model to the radical Wahabi form of Islam.

"There was a danger of the country being taken over by fundamentalism," he says.

"The Amazigh culture offers a ready-made, more liberal identity that many Moroccans already identify with."

Although most Berbers are Muslim, some are Jewish or even Christian and with Amazigh stretching across northern Africa from Egypt, Tunisia, Algeria, Niger and Mali to Morocco, it is language that holds the rather disparate elements together.

And while Arabic remains the official language of the country, when it comes to music, young Moroccans either listen to Western music, or to rap in Amazigh.

Fatman, lead singer with the Agdir-based hip-hop band rap2bled says that the Berber language is being used to pass on messages about drug use and unemployment.
map

"My parents couldn't read a newspaper or understand the television because they were in Arabic," he says.

"Now we have our own television channel and magazines in Berber. We feel much closer now to people in the Rif and Atlas Mountains."

But for intellectuals and activists, this is just the beginning.

Abullah Aourik, an artist and publisher of a magazine in Amazigh, wants to see Berber replace Arabic as the official language of the country.

"We think it would be appropriate to change part of our constitution so that Arabic is no longer required for legal documents or for any official communication," he insists.

"Most Moroccans grow up speaking Berber - why should they be at a disadvantage in having to use classical Arabic which is a foreign language whenever they brush up against bureaucracy?"

The government may not be ready yet to entertain this idea which seems far-fetched to even the majority of the Amazigh themselves, but the teaching of Amazigh in public schools and at university level could in the future lead to it being recognised as a national language - as it already is in Algeria, Mali and Niger.
Posted by sumayya 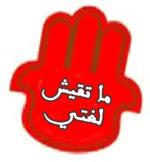